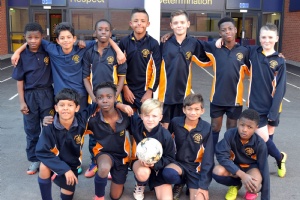 The Year 7 football team created some President Kennedy School history on Tuesday night by becoming the first boys team for 25 years or maybe ever to reach a West Midlands Cup final.

Playing against Caludon Castle, the first half was a hard fought game with few chances. 'Cally' had a golden opportunity to take the lead from the penalty spot, but were denied by a fabulous save from

Fabien. Rahim then finished a fine passing move from President Kennedy School to give us a 1-0 half time lead.

The 2nd half was dominated by our boys, who went onto score 3 more goals through Kamran and 2 own goals.

Final score 4-1 to President Kennedy School, well done to all the boys