Harry Lovelock, Winner of the Armistice Poetry Competition meets the Lord Mayor of Coventry in an Award Ceremony 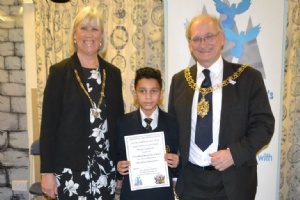 On this 100th anniversary of the Armistice that ended the fighting of the Second World War, Coventry Lord Mayor’s Committee for Peace and Reconciliation cordially invited all children who live or go to school in Coventry and were 16 or younger on 30th November 2018, to write a poem on the theme of peace and/or justice and/or reconciliation.

Our Year 7 students thoroughly enjoyed participating in this event and spent a lot of hours writing and re-drafting their poems in an attempt to win the competition.

It gives me great pleasure to announce that Harry Lovelock was joint winner with a Year 3 class from Keresley Grange Primary School.

On writing the poem, Harry said:

"I found the ideas for my poem by watching a documentary about the war on television. The documentary informed me about the experiences faced by the young men who fought in World War One. These experiences included six weeks of training before the war, being in the trenches in Belgium, duty on the front line and helping out away from the front line. It also informed me about the harsh living conditions such as being surrounded by rats, mud, suffering from trench foot and for the unlucky few, dying.

I have also included the British troops helping the German troops to symbolise that we have reconciled now and that peace has been restored.      I feel privileged to have been chosen for joint first place in the poetry competition and I am extremely grateful."

The judges said that "Harry Lovelock’s poem 'The Great Adventure' tells a story, it’s simple but effective, it has a natural rhythm to it, it was believable, it flowed well, the word choices were well thought out and we felt the author's own voice coming through. Also, it is fitting for the centenary of the ending of World War I."

Philip Brown, Chair of the Lord Mayor's Committee for Peace and Reconciliation who organised this competition, said

"We had such a positive response to this competition that it will now become a regular feature of the annual Peace Festival. In addition, next year we are hoping to have one of the winning poems set to music in order to create the Coventry Schools Peace Song".

The Lord Mayor of Coventry awarded prizes, certificates and copies of the book containing all the poems submitted to the competition to the joint winners on Thursday 24th January at Keresley Grange Primary School.